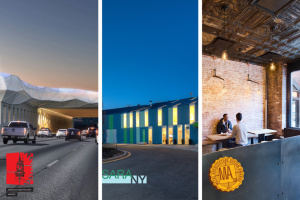 Skyscape reimagines a massive bridge overpass in downtown Atlanta by creating a sculptural facade on the overpass heightening the experience for motorists below and on the overpass itself. The 3D “facade” extends into a canopy at street level creating a public space that illuminates the existing folk art, a cultural relic of the South. The facade also addresses the deficiencies of the spaces above and below, by smoothing out the uneven edges using the “cloud” form. The structure is algorithmically-derived allowing us to control technical feasibility and cost, while freely experimenting with form. The resulting “cloud” not only provides a delightful experience, but represents Atlanta’s literary history and tech-based future.

The Sportime/John McEnroe Tennis Academy was a collective effort between public, private and non-profit entities to improve sports and recreation opportunities for nearby communities and under-resourced children. The design consists of a 6-bay, pre-engineered steel structure sheathed in blue metal panels containing a fieldhouse and clubhouse. The clubhouse is lightly rotated to relate to the entrance plaza, creating a fissure that welcomes natural light into the building. A pattern of blue and green stripes with integrated window slots in the clubhouse, and linear lights in the fieldhouse, is inspired by the field and sky, as well as stop-motion photographs of bouncing tennis balls. There are 20 tennis courts in total, a 16,000 SF clubhouse and permanent stadium-court seating for 1000 spectators.

The design of Zucker’s Bagels & Smoked Fish emerged as a desire to celebrate the original metal features of the late 19th-century building in a way that evokes both the familiar and the new. Through early probes, the historic elements that were discovered include a pressed tin ceiling, interior cast iron columns and, cast iron columns and a rosette trim on the storefront. Though careful restoration, we revived these intricate pieces and juxtaposed them with modern, monolithic black handcrafted steel plates that form the countertops, free-standing partition and cafe furniture. Through this space, we hope to preserve a piece of American architectural history while creating continuity between the past and the present.